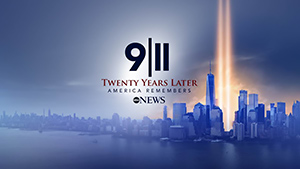 9/11 + 20: The Longest Shadow - Narrated by George Stephanopoulos, this five-part documentary series, streaming online on five consecutive nights beginning Monday, Sept. 6 (8:30-9:00 p.m. EDT) on ABC News Live, examines a nation and world completely changed by the terrifying moments when al-Qaeda operatives used U.S. jetliners to attack America on Sept. 11, 2001. Returning to the morning of Sept. 11, the series explores what America is and has become in the aftermath of one of the most traumatic events in history.

Women of 9/11: A Special Edition of 20/20 with Robin Roberts - For the first time, after two decades, the women whose lives changed forever on Sept. 11 tell their stories of survival, pain and redemption in this landmark two-hour documentary special airing on ABC on September 8 (9-11 p.m. EDT).

9/11: Inside the President's War Room (Apple+ and BBC One) - This documentary tells the definitive story of the Bush administration through 12 hours of that momentous day, with first-hand testimony from President Bush, Vice-President Dick Cheney, National Security Advisor Condoleezza Rice and other senior staff who had their hands on the levers of power. The events of that day led to two decades of conflict in Afghanistan and Iraq. As America and its allies now withdraw from Afghanistan and the Taliban resume control, this is the story of how it all began.

9/11: One Day in America (National Geographic) - Made in official collaboration with the 9/11 Memorial & Museum, this six-part documentary series tells the in-depth story of September 11th through the eyes of the witnesses, heroes and survivors.

Frontline: America After 9/11 (PBS) - Airing on September 7, 2021, this two-hour special examines the U.S. response to the terrorist attacks and devastating consequences across three presidencies. From the wars in Afghanistan and Iraq to the Jan. 6 insurrection, veteran “Frontline” filmmaker and chronicler of U.S. politics Michael Kirk and his award-winning team expose the legacy of 9/11 and the ongoing challenge it poses for the president and the country. (Watch the official trailer).

Generation 9/11 (PBS) - An intimate film driven by the stories and personalities of its protagonists, who were born in the wake of a global tragedy which, for them, was also deeply personal. But it is also the story an entire generation that has been shaped by the attacks and their aftermath.

Memory Box: Echoes of 9/11 (MSNBC) - Marking the 20th anniversary of September 11th, the film paints an intimate portrait of resilience and human perspective. The feature documentary airs Wednesday, September 8th at 10 p.m. ET and will stream exclusively on Peacock.

Turning Point: 9/11 and the War on Terror (Netflix) - This 5-part docu-series answers the following questions: Who attacked the U.S. and why? What breakdowns in intelligence allowed it to happen? How did decisions at the highest levels of three administrations in the war on terror bring us to this moment? The series also features a wide range of interviewees including officials from multiple U.S. presidential administrations, former CIA members, U.S. military veterans, Afghanistan National Army soldiers, Taliban commanders, members of the Afghan government, Afghan warlords, and civilians — many who had never spoken on camera before. Airs on Netflix on September 1, 2021.